I call what happened to me within 16 months a spiritual phenomena. When these events happened, I researched it and it always gave me a positive message. The feeling I had with each encounter (after the initial shock LOL) deep inside of me, was positive and the sense of calm deep from within was (and still is) real.  I know it was a connection with nature and God. When I was close to entering the deep, dark hole, some type of spiritual phenomena (whom I would like to call God) pulled me out of the darkness and gave me a message that I needed to hear.  I have severe depression, PTSD and anxiety.  I turn to nature for calmness and to quiet my mind.  This is what happened to me and I feel so blessed. 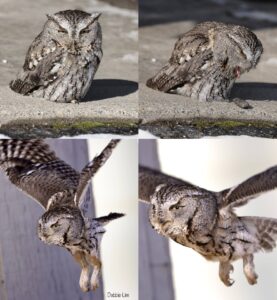 On Saturday, February 13, 2021 around 1:00 PM, I had this urge to visit an owl, but didn’t know where. So, I drove to a few areas that we knew of owls and decided it wasn’t our day for owls…. That is until I drove into our driveway. I touched the button to open the garage bay door and saw (what I thought) a thick piece of ice. The ice was directly in my line of driving into the garage.  The ice moved and I then realized it was a Screech Owl!!!!!! A Screech Owl… one of Nino’s favorite owls sitting in front of our garage and stayed there while I opened the bay door!!!!  Thank GOD I already had my camera with me in the car!!  To make a long story short, I sat in the car for two hours, Nino joined me by sneaking out of the front door and he climbed in the backseat.  I took videos and photos of the owl.  After two hours of sitting in the car, we left him alone and went into the house.  We came back out and he was gone and we never saw him again.

The meaning of this wonderful blessing:  An owl is a sign of wisdom and understanding for the vast majority of people. It is a symbol of learning and mental change. It also represents a fresh start and a new beginning. You may be about to begin a fresh phase in your life if you see an owl. 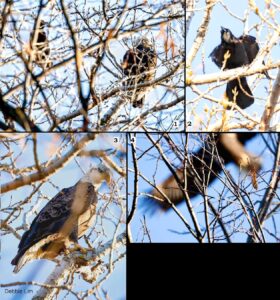 The second event that was out of the ordinary happened on Sunday, December 12, 2021, around 9:00 AM. I had a strong feeling that I needed to see an eagle. I tried to wake Nino up so that we could go see if we could find one, but he was too tired. While I was letting the dogs out, I heard and saw at least 4 crows and a few Blue Jays screaming and carrying on. I immediately grabbed my camera, let the dogs in and ran outside. The crows were screaming in the Pine Tree directly in front of our Deck, but I did not see anything there…. I walked to the other set of trees and saw another crow screaming at a large bird (Pic 1). When I got closer, I could not believe what I saw! I saw a WHITE head and large body, but it was facing toward the back of where I was standing. I knew instantly that it was an eagle! AN EAGLE IN OUR BACKYARD!!!??? Unheard of!!!

I started shaking with excitement and had a tough time trying to get a good shot of him, because of all the branches. It happened so fast!  As soon as he looked back at me, he turned his head (pic 3) to the side and I was able to get a decent full shot of him before he flew off (pic 4). That experience was a miracle and of course unexpected!

Meaning that I found on many websites: The eagle brings the message of renewed life because it is associated with the east winds – the direction of spring, dawn and rebirth, (He was on the EAST side of our property!). If an individual has been going through a hard time, eagle not only signals a new beginning, but provides that person with the stamina and resilience to endure the difficulties. 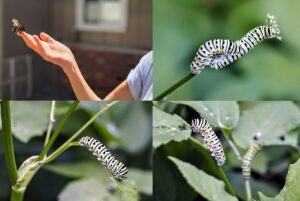 On Monday, June 13, 2022 at 7:13PM, Nino and I were admiring the birds and tomato plants on our deck.  A beautiful butterfly (called a “Black Swallowtail”) kept flying around me…. literally around ME. He came up to me so close at times and then finally I put my hand out and within a second, he landed on my finger! He sat there for a while… enough time for Nino to grab his phone and take a few pictures.

A few days later, we saw 10 black swallowtail caterpillars on the plants near the deck.

So, what is the spiritual meaning of a butterfly landing on you? A butterfly landing on you is a spiritual sign that represents you are in a season of transformation, growth, spiritual pursuits, and discovering your truth and inner wisdom. You are going through a deep internal change, even if you don’t realize it.  Or it could mean “that someone who has passed away has come back to say hello.“ 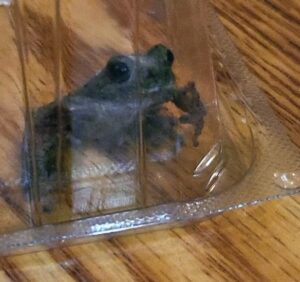 On Thursday, June 16, 2022 at 10:15PM, a VERY usual thing happened to me!  I just took my shower and getting my dogs and I ready for bed.  I always give my little dogs a bedtime snack.  I sat on the floor and played with them while giving them their snack.  While they were eating their snack, I walked out of the room, to the kitchen and walked back…. no biggie, right??!!

When I entered the bedroom, I saw something on the floor where I was just sitting with the dogs.  I thought perhaps one of them spit up something or a little “poop” was accidentally deposited there (I have Yorkies… they are pretty small! LOL)  As I got closer to investigate,  it JUMPED UP!!  It was a dang frog!!!!!!!

How the heck did a frog get into my bedroom!!??  I never open the bedroom windows and the doors are on the other side of the house!!! Of course it would startle just about anyone! You would NOT expect to see a dang frog in your bedroom unless you live in the woods or jungle!!  I jumped on the bed and thought I better get something to cover it.  I ran to the kitchen and found the first thing I saw… a plastic takeout container and that did the job!  I waited until Nino got home from his gig to put him outside!

This is what I found on MANY sites the meaning of this:  In many cultures, it is believed that if you see a frog in your house, it is a good omen. It can symbolize transformation, luck, and positivity among other good things.

From these four spiritual phenomena, this is what I believe it is telling me: fresh start…. a new beginning… transformation… growth… spiritual pursuit and deep internal change.